An American Dipper was reported in nearby Corrales just before the Albuquerque CBC. This is a really odd place for a Dipper to be found, slow-clear water in the flat Bosque.  Not the mountain white-water they are normally found in.  I was dubious at first, but sure enough, it was confirmed shortly after by a reputable birder.  I really wanted to get down there and see it before we left for Pittsburgh, but time was against me so I missed it and needed it for a challenge that I was doing last year.
But, I had some free time today and a good friend of mine, Joe Schelling (who had seen it last week), met me for some breakfast and a walk in the Bosque.  The weather was nice, a bit cold but Sunny and the wind hadn't picked up yet.  We first saw a Sandhill Crane standing just off of a path. 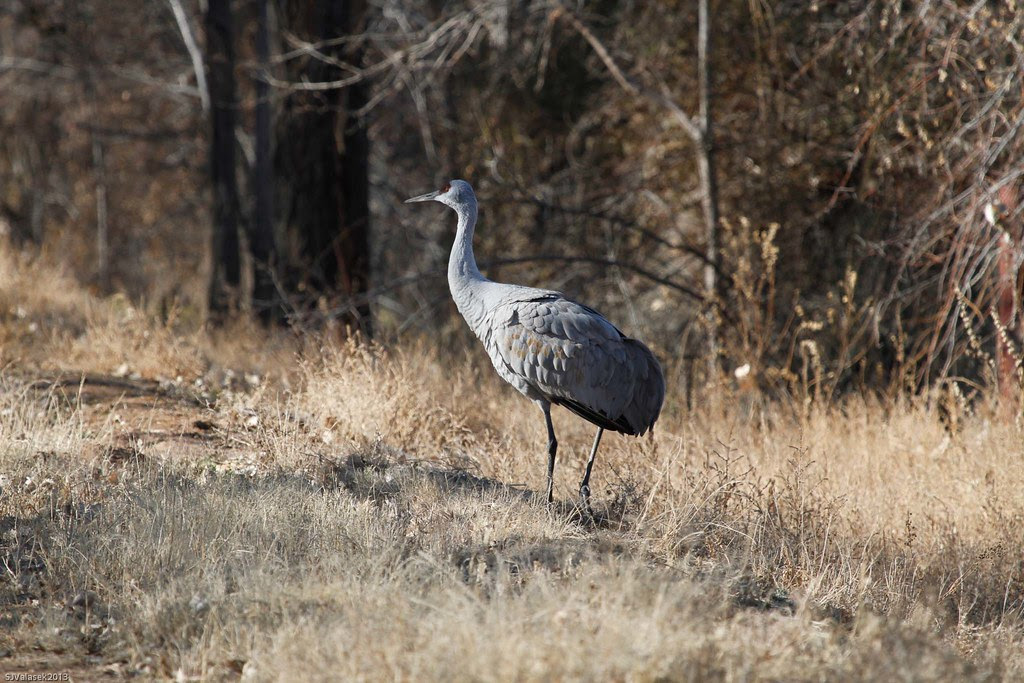 But as we soon saw, it had a hurt foot or leg and limped away from us badly.  I notified the local birders and apparently it's a known issue and the bird won't sit still long enough to be caught.  But I managed to get close enough to get a shot of it's beautifully colored face. 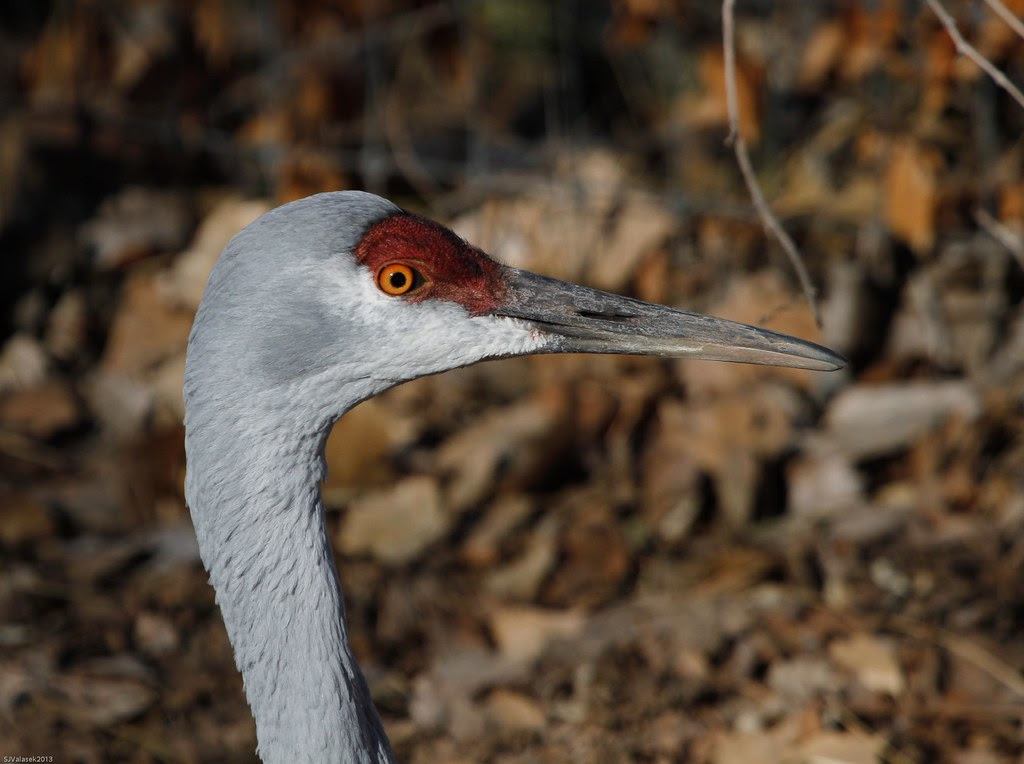 ***Well, I just got an update on this guy.  Apparently it ended up flying into a ditch and couldn't get out.  A local wildlife officer found the bird and determined that it's leg was too badly broken and was euthanized, poor guy.

Joe and I made our way to the ditch where he had seen the Dipper the previous week, after almost a dozen tries. We ended up seeing lots of Song Sparrows and Dark-Eyed Juncos along the ditch.
We would walk along and examine every nook and cranny along the sides of the water with no luck.  But then Joe said "there it is!" and pointed almost right below our feet. 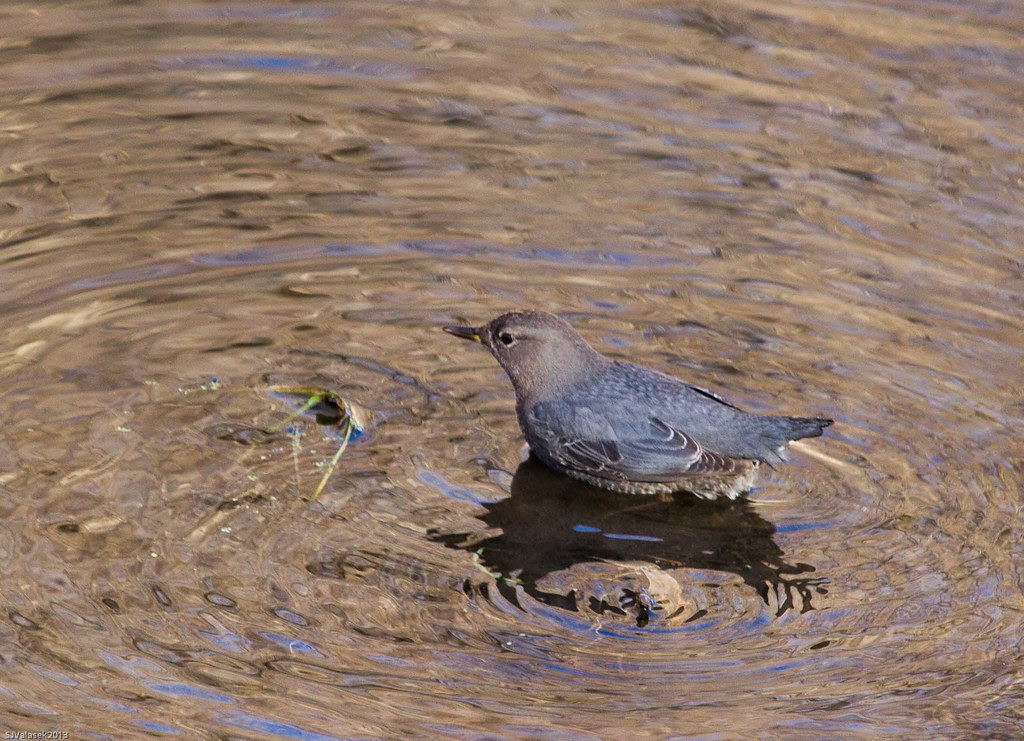 The Dipper was standing on the bank near us and jumped into the water and swam around a bit. 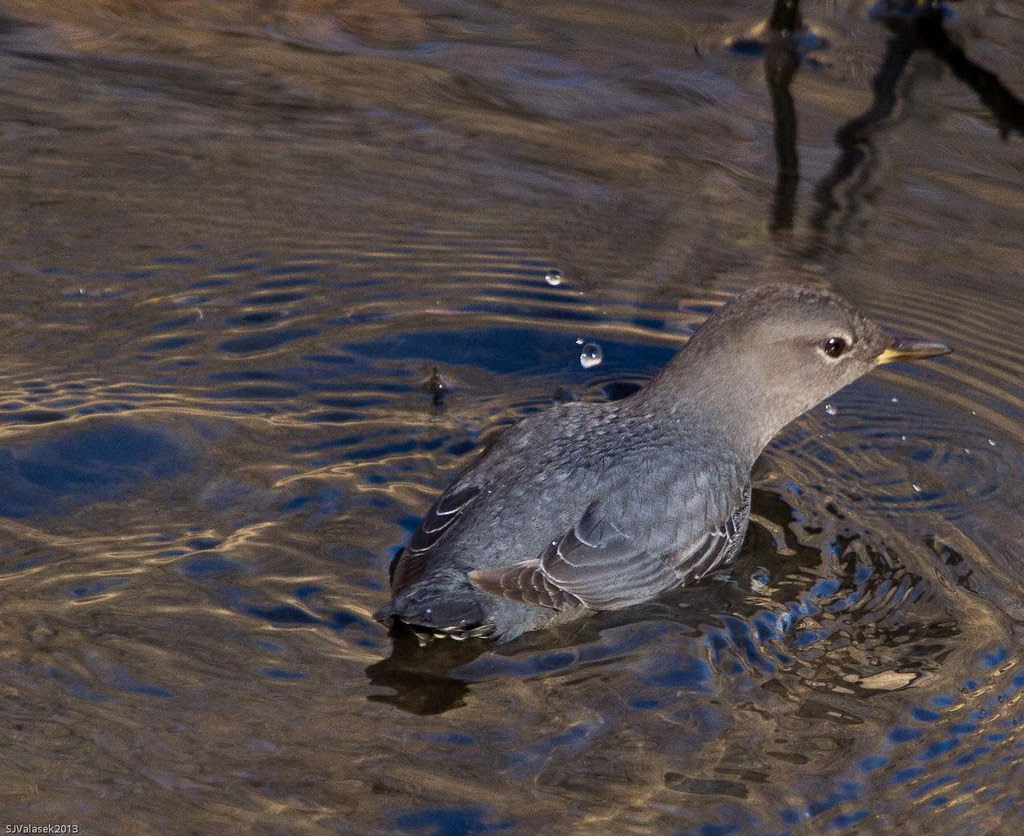 It jumped out of the water and we got to watch it do it's thing.  The American Dipper gets it's name from the motion it makes while standing, which is a quick up and down movement, not from swimming. 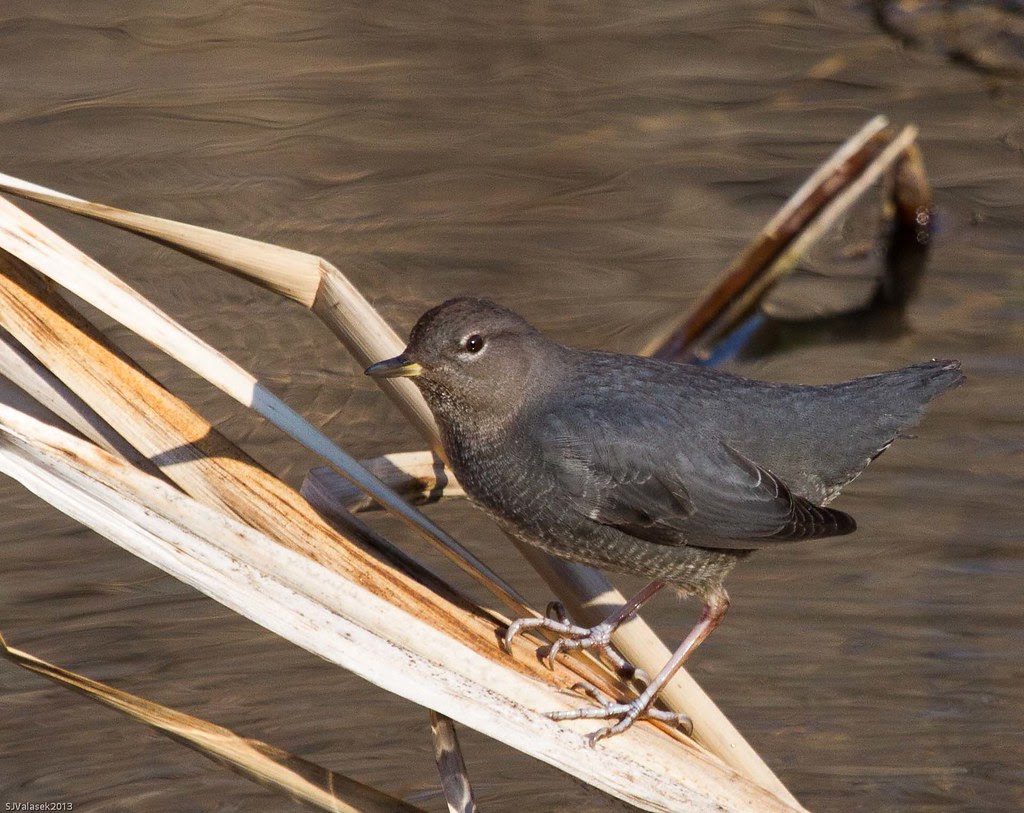 Another characteristic of Dippers are their bright, white eyelids which they constantly flash by blinking.  According to the Sibley Guide to Bird Life and Behavior, this may be a way to signal other birds in their normally noisy white-water habitats.  But this Dipper is really in an odd spot and it is really quiet there.  But nevertheless, the eyelids were constantly being shown and I managed to get a photo. 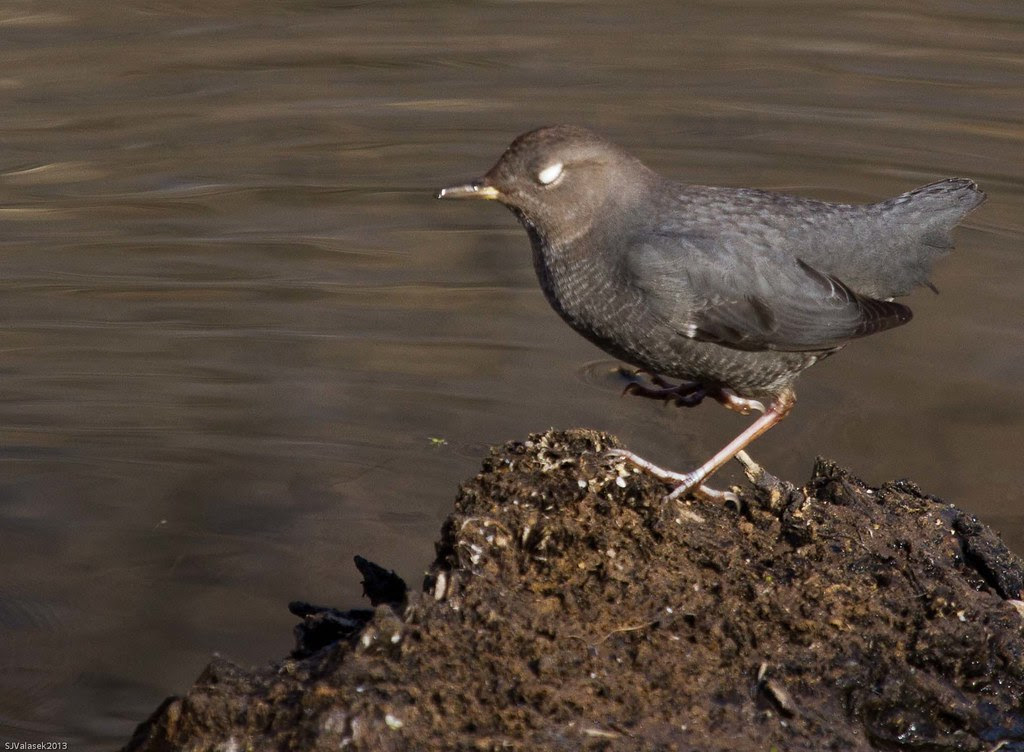 Then the Dipper flew off across the stream and tried to hide in some shadows. 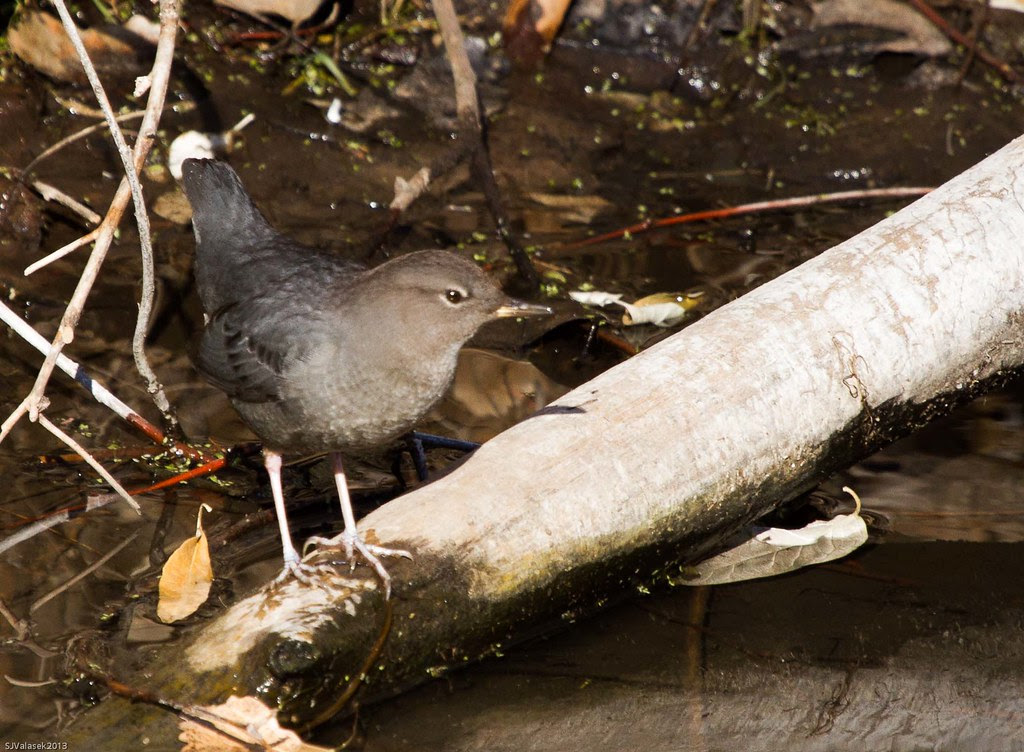 It eventually flew off downstream while we continued on our way. 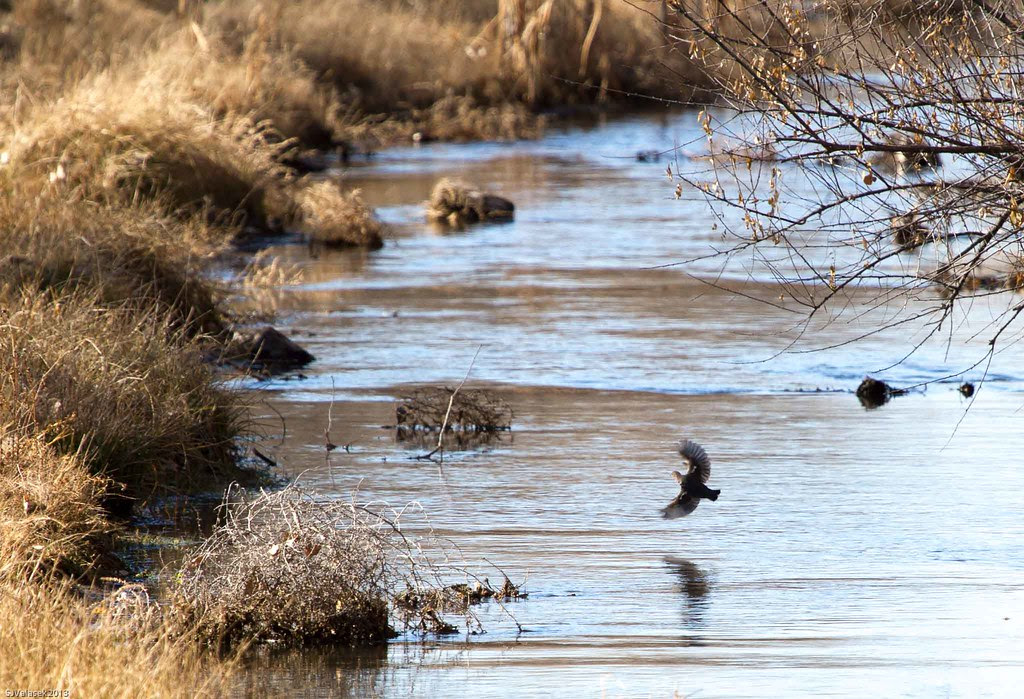 The odd birds didn't stop there.  We flushed two different Sandpipers into flying away from us, and despite really trying, we couldn't see them again or get any photos, but they looked like Spotted Sandpipers to us.
We saw one Townsend's Solitaire taking a drink from the stream.  It's normally not found this low, but this winter they have been all through the Bosque. 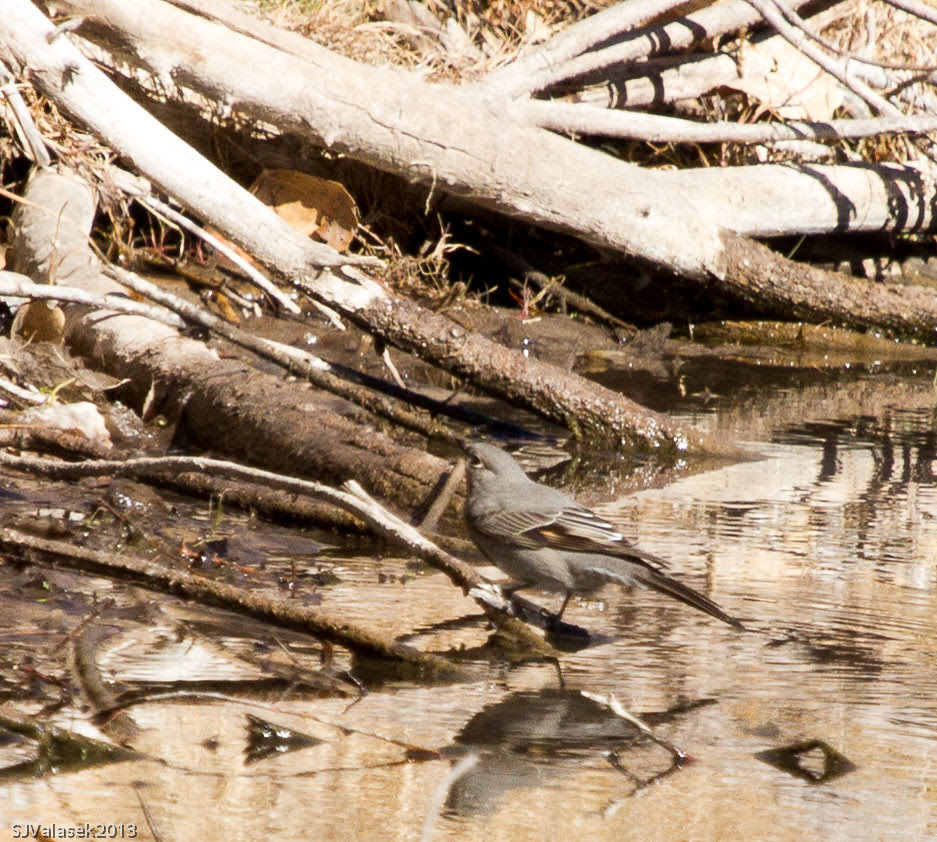 And a group of Mallards and American Wigeons had an odd duck tagging along with them, a beautiful Northern Pintail. 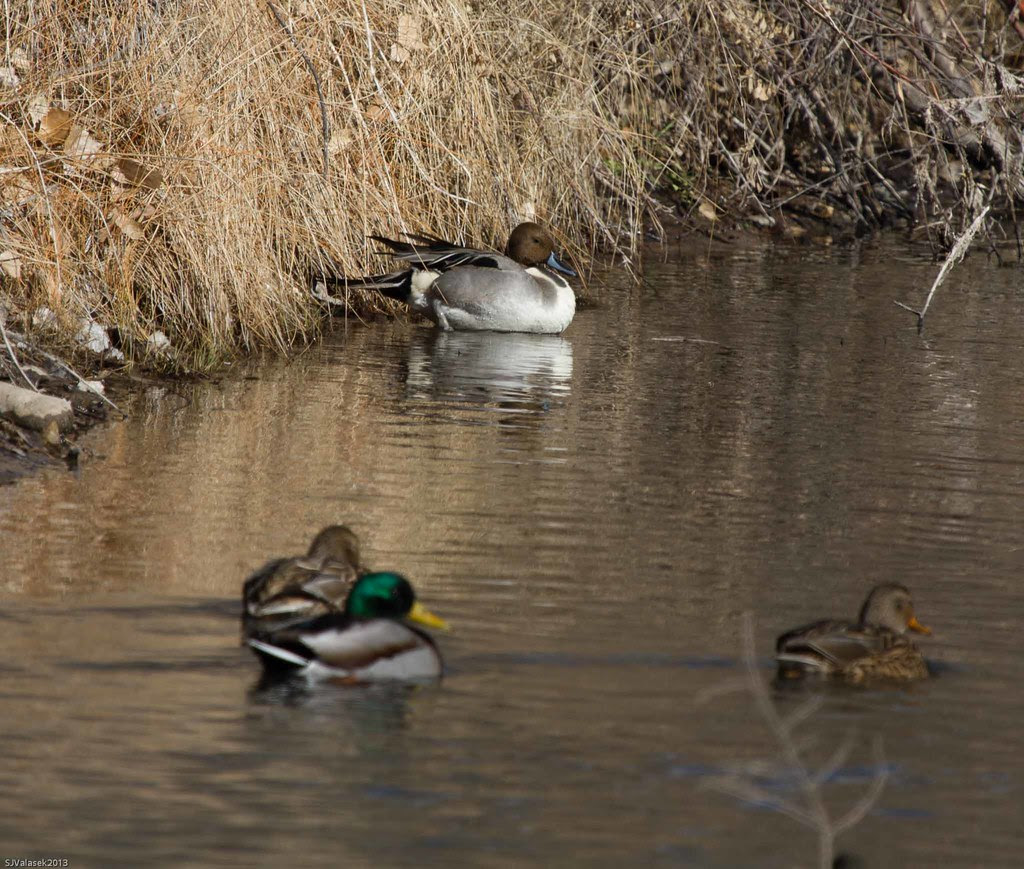 We would add some White-Crowned Sparrows, Hairy and Downy Woodpeckers and a lone Red-Tailed Hawk to our list.  We ended up with 26 species, which isn't bad for my first list of the year.

Thanks for making it this far,
Cheers!
Posted by Unknown at 4:47 PM