Last year was the first year that I went out chasing rare birds, when I could.  Having 2 kids accompanying me really put dampers on when I could get out.

The first rare bird of the year for me was a Common Goldeneye.  It was one of a few seen at the Tingley Beach fishing ponds in Albuquerque. There was a pair of them, and some people reported seeing 2 males.  they hung out for the winter, and now are back. 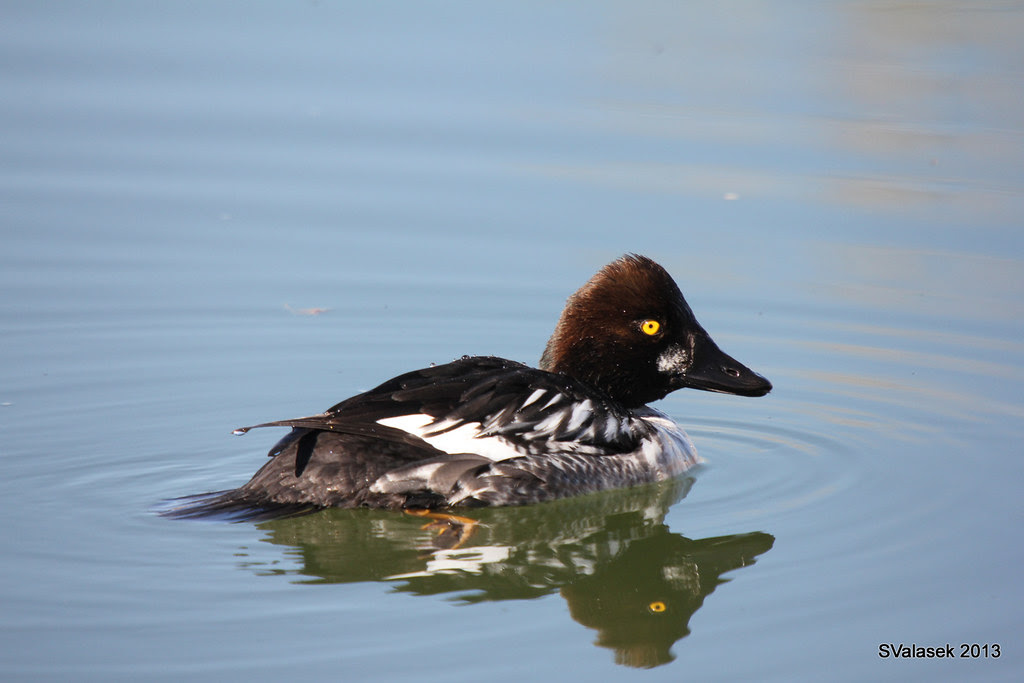 The only rare bird that I was around to "discover" was seen at the Rio Grande Nature Center while on one of the weekend walks.  Someone spotted a warbler near one of the ponds and it turned out to be a Palm Warbler. 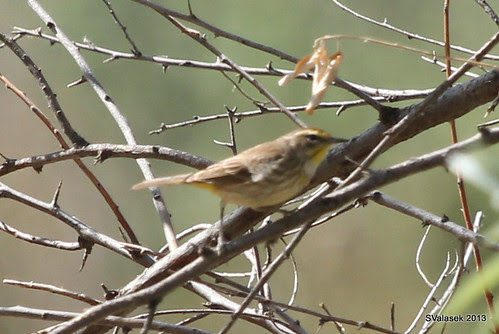 I amazed to see the people showing up at the Nature Center to go see the bird and we were just done with out walk. It would be the only county record for the year.

The next rarity that I had heard of was while buying bird feed.  There were Bobolinks seen at the old Price's Dairy South of the city.  It would be my first trip to what was becoming Valle de Oro NWR.  My daughter and I set out of foot while my son was sleeping, but we were soon inundated with mosquitoes and made a retreat to our van.  We ended up cruising down the main ditch and I managed to see a male Bobolink singing away on a fence. 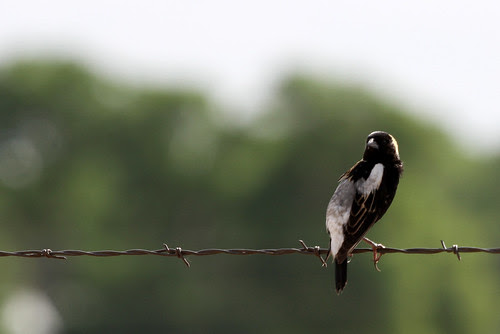 There were a few there, maybe some pairs, but they were gone by the time that Summer was in full swing.

And then in July was the big one, the one that I referred to as the most popular bird in America on my old blog.  I'm referring to the Rufous-Necked Wood-Rail of course.  I saw the news of it being sighted at Bosque del Apache first on Facebook and I really wanted to drop what I was doing and run down there.  But with the kids and my schedule, I had to wait until the following Saturday.  Lucky for me the bird was still around.  I got to take some good friends with me.  Seeing the bird ended up being almost anti-climatic.  We got down there late in the afternoon and the Wood-Rail made an appearance after less than 30 minutes of waiting. 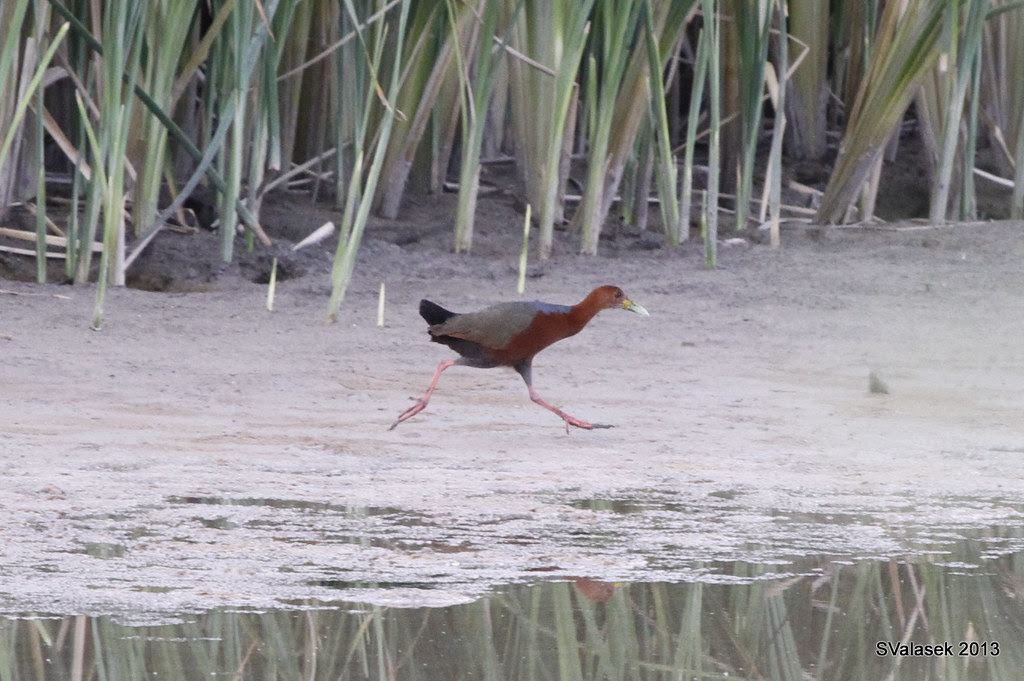 We watched it feeding and crisscrossing the marsh for another ninety minutes and went off to explore the rest of the refuge.

This fall a Common Loon was reported in a lonely mountain lake north of Santa Fe.  I managed to drive up there one evening and found the bird before I even left my car.  It was the only thing on the lake.  I used a handicap fishing pier to get fairly close to the bird and watched it dive and feed for a few minutes. 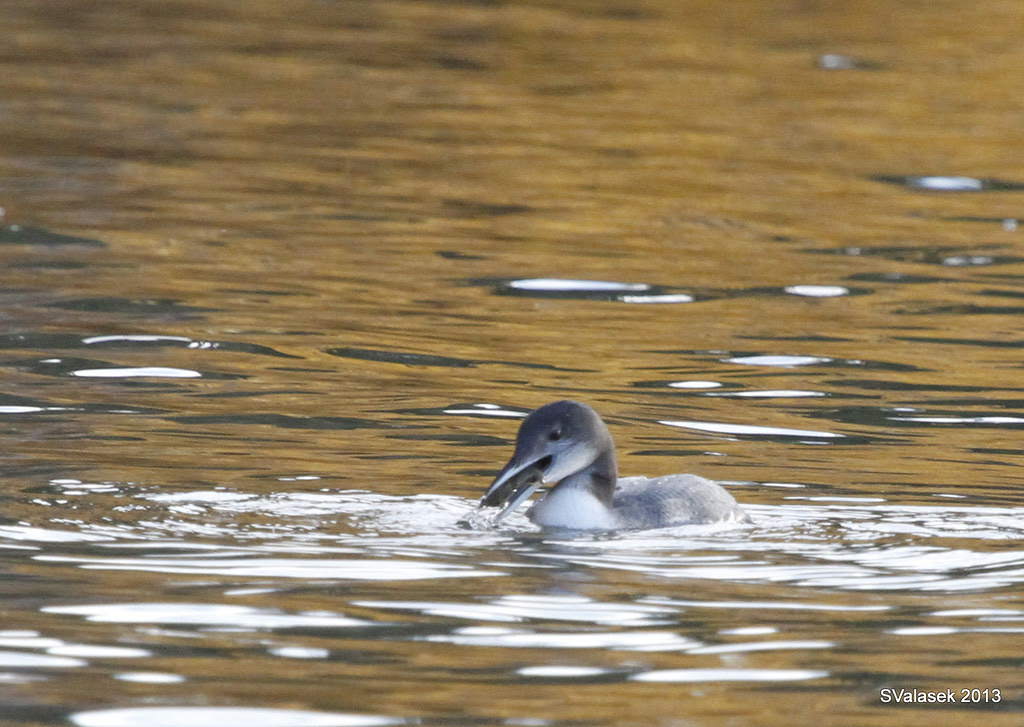 And then a Pacific Loon was being reported at some fishing lakes not too far from where the Common Loon was.  This one took almost 2 hours of watching before I spotted it, but two Loons in the same week was pretty exciting for me. 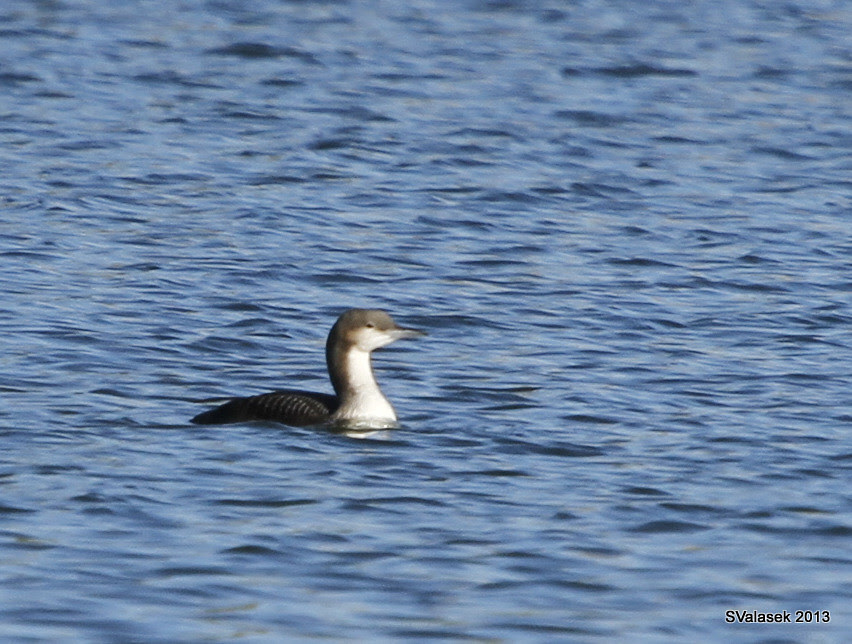 This guy hung out for a few more weeks.  I guess it enjoyed the company of the Western Grebes that it was seen swimming with.

I was fortunate to make it to the annual Festival of the Cranes at Bosque del Apache NWR in November despite the snow.  The crowds were sparse, but those of us at the Visitor's Center were fortunate to see a Golden-Crowned Sparrow visiting the feeder. 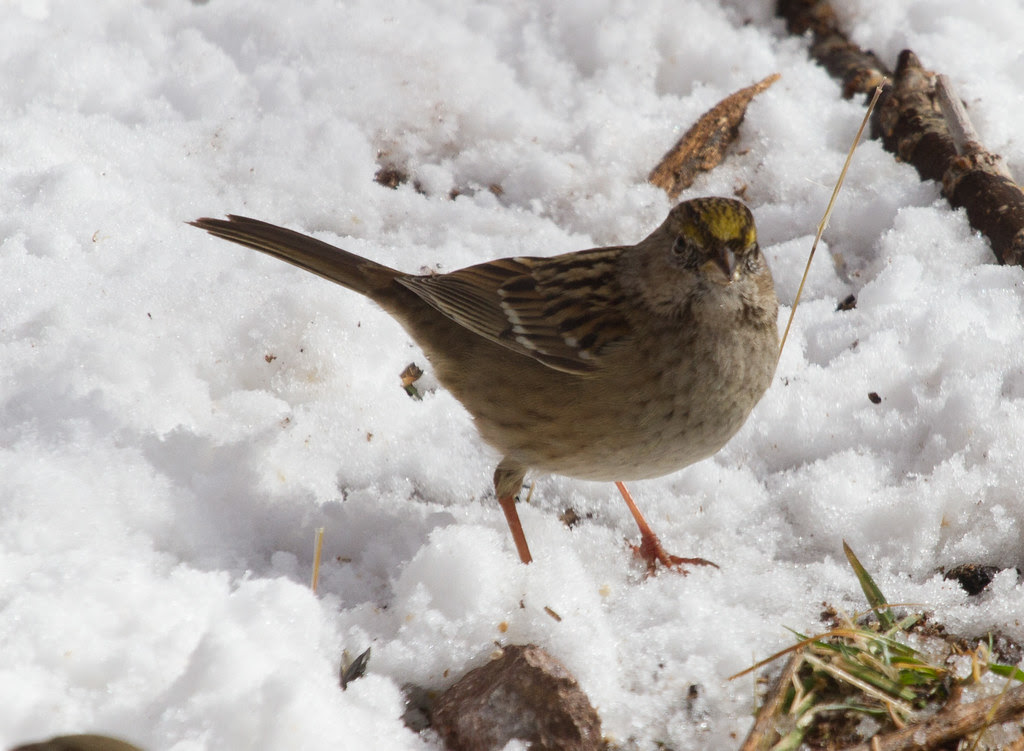 As far as I know it is still down there, there's one listed on the ebird rare-bird alert almost every week.

During the scouting for our Christmas Bird Count some interesting birds were reported.  A Northern Parula was reported behind some houses in town, but I didn't get a chance to see it.  And then a Pine Warbler was reported at the Duck Ponds at UNM.  I took my son down there on a very cold day and managed to find it hanging out with some Bushtits and Yellow-Rumped Warblers. 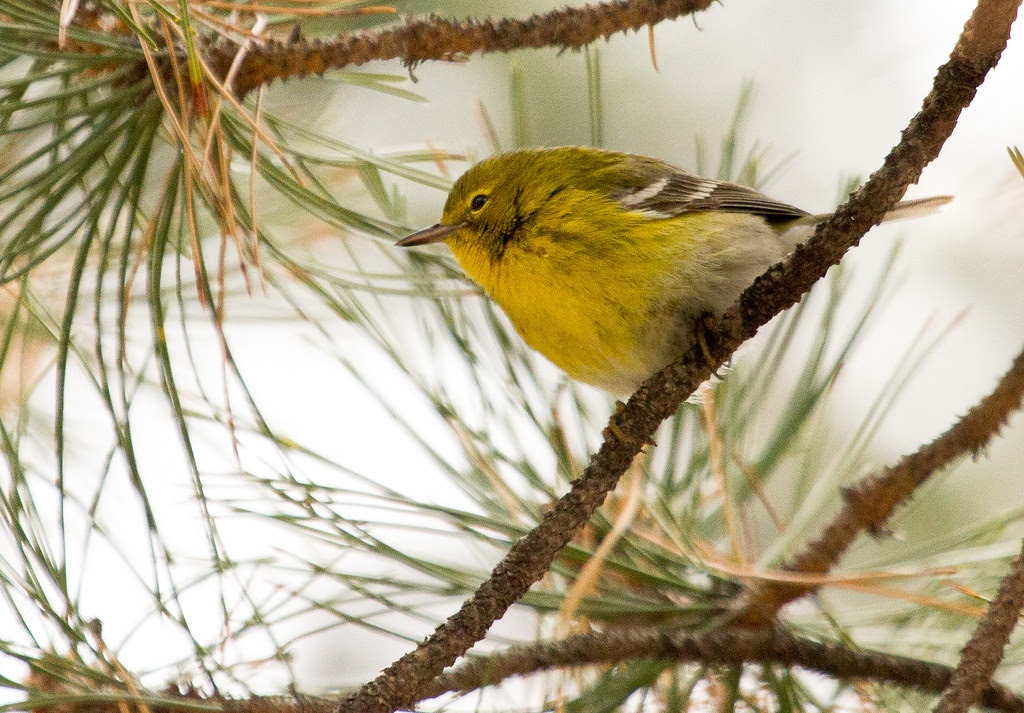 And then on the day of the actual CBC count, our team saw another Pine Warbler at the Journal Center, across town from the one at the Duck Pond. 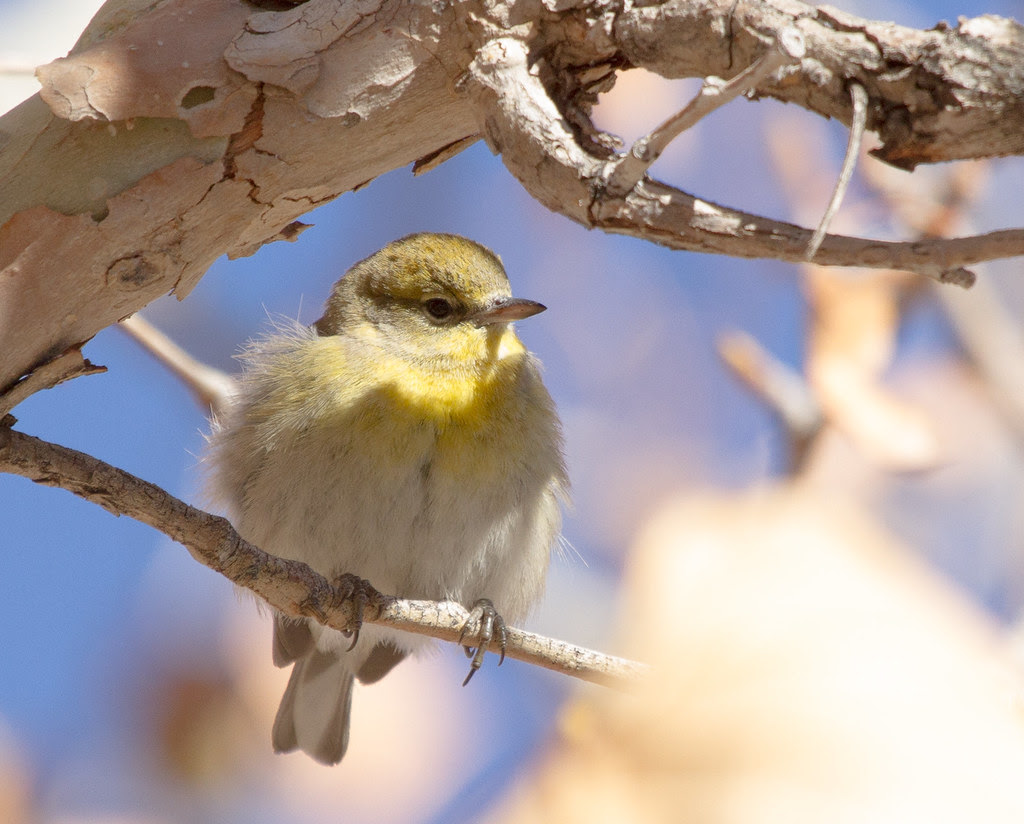 Another bird seen during our CBC was a Brant Goose.  I ended up chasing it for a few days at different parts of the city. Buy my daughter and I finally found it at a golf course that it was favoring. 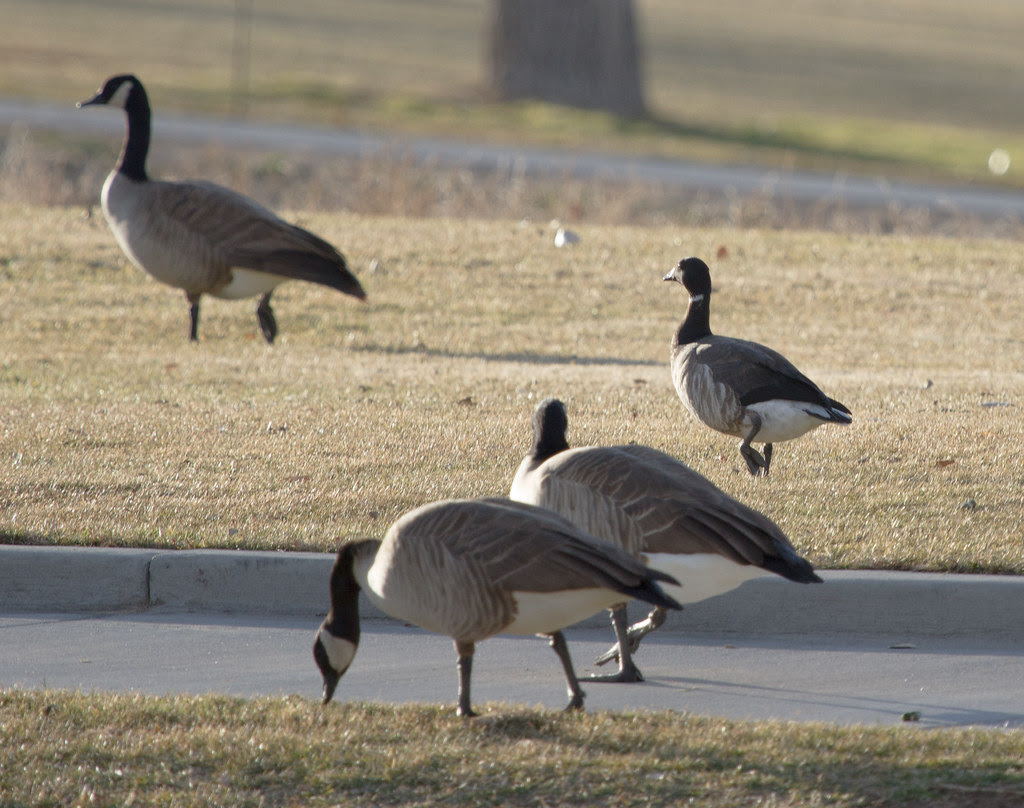 You can see it here contrasted with some Canada Geese. It is also still being seen around the city.

And finally the other big bird news of the year was the Snowy Owl Irruption in the North-Eastern part of the country.  As luck would have it we were going home to Pittsburgh for the holidays and a large number were seen around the state.  After chasing some on Christmas Eve, I ended up seeing 3 of them at Presque Isle State Park in Lake Erie.  They were some really amazing birds to see and I'm glad that I got to see them. 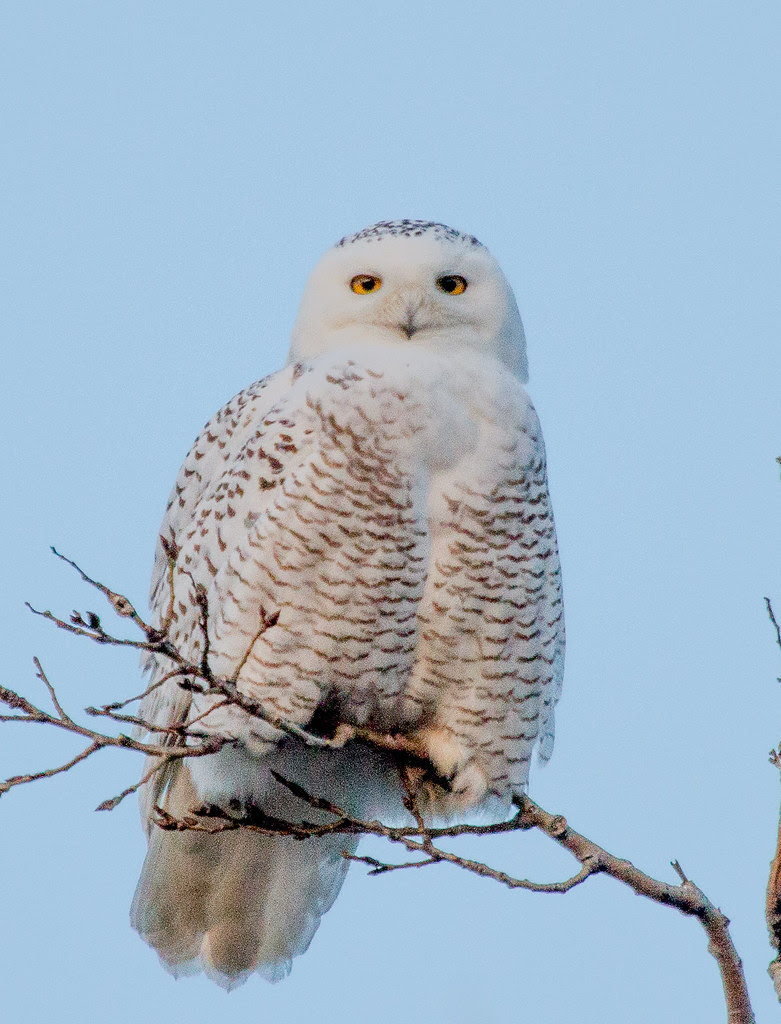 I keep getting the rare bird alerts for New Mexico, but with out impending move, my ability to get out and see any will be few and far between.  But hopefully I get to add lots of new birds to my list this year and maybe I'll get a decent photo of some.

Thanks for making it this far,