I just wanted to share a photo from a trip to Wexford.  We reached the South Slobs just as the Sun was rising and one of the first birds that we saw was this Hen (Northern) Harrier cruising around. 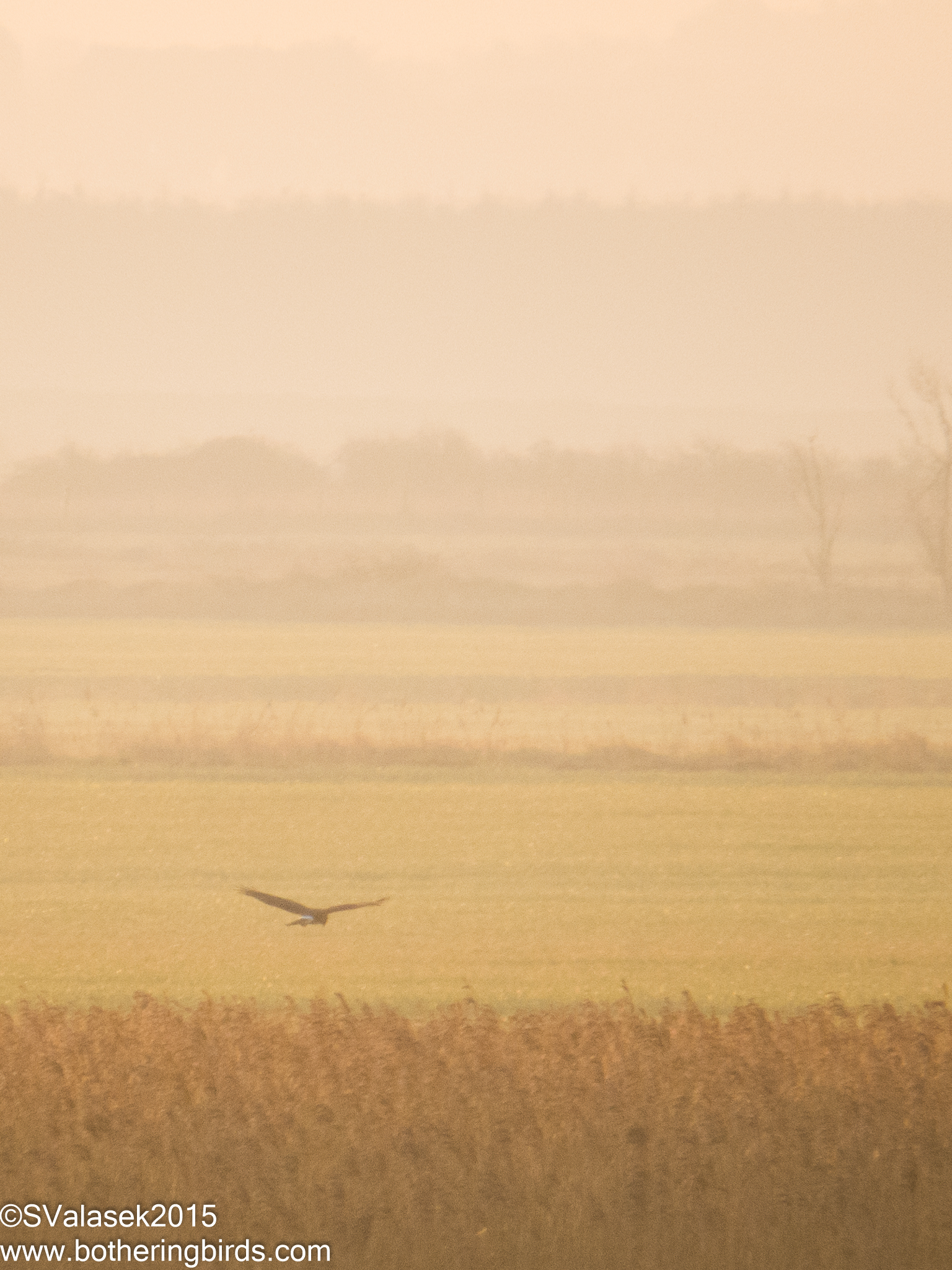 Birding in a Winter Ireland...

January was fairly busy.  I still don't get out as much as I'd like, but such is life.  I started off the month by participating in the County Dublin Bird Race, basically a big day competition within Dublin County.  It was a really long day, but fun.  I got to meet some new people, but didn't take any photos.  Part of that was due to the weather, lots of rain, and just being in a hurry.  But out first bird of the day ID'd was a Peregrine Falcon and our last bird was a Lesser Yellowlegs.
One of the birds that we had looked for during the race, but dipped on, was a Black Redstart.  They are rare visitors to Ireland, but tend to show up each Winter along the East Coast.  I returned to Dun Laoghaire the following week with my son to see if we could see one, and sure enough, there it was on the rocky beach.

We also got to see lots of Ruddy Turnstones and Shags, as well as the usual mix of gulls. But it was really cold and windy, so we didn't spend too much time on the pier.  But I did spot some Mediterranean Gulls, some getting their spring duds already.

While out driving in Co. Kildare one day I spotted a large bird in the middle of a field.  I stopped and went back to see what it was.  I pulled off and saw a male Ring-Necked Pheasant standing out in the pasture, but by the time I got my camera out, it had flown.  I was disappointed, until I saw why.  A Buzzard had flown into the trees next to the field.

On another morning I took my son out to Castletown House in nearby Celbridge.  I was hoping to see some Fieldfares and Redwings, but I didn't see much beyond the usual Robins, Blackbirds and Song Thrushes.  But a Mute Swan decided to be photogenic for me.

My friend Brian Carruthers invited me out to the National Botanic Gardens in Dublin one Sunday morning.  I had not been there yet, and was eager to check it out.  I got there to see a really nice cafe and lots of land.  Much more than Pittsburgh's Botanical Gardens.  Brian had some birds that he wanted to photograph and I just wanted to be out for a walk.  We were walking around the Tolka River when I spotted a White-Breasted Dipper on the far bank, a very nice surprise.

And we would see another one just downstream a bit.  Brian and I may have seen them fly into a nest, but didn't exactly see where they went, or where they shortly reappeared from.  As I was looking at some ivy, Brian gestured me over and pointed to a hedgerow.  There was a Goldcrest flittering in and out of the leaves and had not a care in the world that we were just a few feet way watching it.

I can't say how happy I am at this photo.  Those guys do not like to stand still at all.  One of the target birds that Brian wanted to see was a Treecreeper.  We did end up seeing one, but it flew off before we could get any photos.  The other interesting thing that we saw was a bumblebee out in some really cold weather, it was probably 2°C out, but here was a large, black bee visiting some flowers.

After we left the gardens Brian took me to an urban pond that was once a water source for Guinness.  There were quite a few birds there, including some exotics kept as... "pets"?  A Smew, a Hooded Merganser and a White-Cheeked Pintail, all of which had clipped wings, so I wasn't too interested in seeing them.  But I got a decent shot of a pair of Tufted Ducks.

Brian and I went our separate ways and I decided to stop by Phoenix Park on my way home.  The Sun was out and it wasn't too cold.  I was told that some Wood Ducks could be found at a certain pond, and it would be nice to see my favorite North American duck again.  But there were none to be seen.  But there were a few Mandarin Ducks about.  I'm not sure what their status is, but I know that they breed over in England.  Regardless, a really nice duck to look at.

I had been seeing reports of Eiders off of the coast of Skerries, in Co. Fingal.  I had tried to see them on New Year's Eve, but they weren't there then.  Once again I met Brian along the harbor and we went looking for sea ducks.  There were many Gulls and Great Cormorants off shore, and lots of Ruddy Turnstones closer in.  We walked along the coast for a bit when Brian saw some white birds fairly far out.  We weren't sure if they were Eiders or Long-Tails at first, but we finally got a good enough look to confirm Eiders.  They were very far out and the Sun was in a bad spot for photos, so we decided to walk down the beach for a bit and try to get a better angle on them.  Lucky for us they got even closer in to shore.

They shortly flew off and out of sight.  As we were walking along a large flock of Sanderlings flew by us and landed on the beach.  They were near some Curlews who weren't too happy to be near one another.

Just some odds and ends that I've seen recently.

I've noticed that I don't have photos of a Great Tit, and the ones that I have of Coal and Long-Tailed are lousy, so I'm going to go out and try to get those sorted out.  I'm also going to try and do the Co. Wicklow Bird Race next weekend and hopefully see some Crossbills and Great-Spotted Woodpeckers.  Plus I really want to travel down to Co. Wexford and the Nature Reserve down there before the wintering birds leave.
I'm also going on a trip to Eastern Europe in June which I'm really looking forward too.  Hopefully I can get some nice camera gear to take along, but I fear that I'll be stuck with the current camera until we're back stateside in 2016.

I'm looking at performing a facelift on the site soon, so the next time you visit you may be in for a surprise.

Thanks for making it this far,